This design was the first of our 20th Anniversary styles for 2020! Released in early spring, it features a fun necromantic pin-up from hometown hero Paige Pumphrey.

The zip-up front has the 20th Anniversary Games and Stuff logo on the front left, with Paige's artwork on the back.

Conceived to showcase original designs from some of our favorite artists from gaming and beyond, the Games and Stuff Artist Series was started in 2018 and has so far featured work from Kwanchai Moriya and Jonny Hodgson.
The first piece from 2020 is this fun necromantic pin-up from hometown hero Paige Pumphrey.

This hoodie was limited run and all that remains are a few units in Men's small and medium. Get them before they're gone! 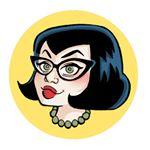 I am a Baltimore-bred, Brooklyn-based illustrator and designer. My illustration work typically focuses on expressive characters, most notably pinup girls and comic heroes. My design sensibilities and attention to typography work in conjunction with my artwork to create memorable posters and merchandise. You can see my work online as well as at events such as burlesque shows, tattoo festivals, and comic conventions. When I’m not illustrating or designing, I also letter manga professionally. And when I’m not doing that, I’m dressing up and going on adventures around NYC.

You can find me and my work at: